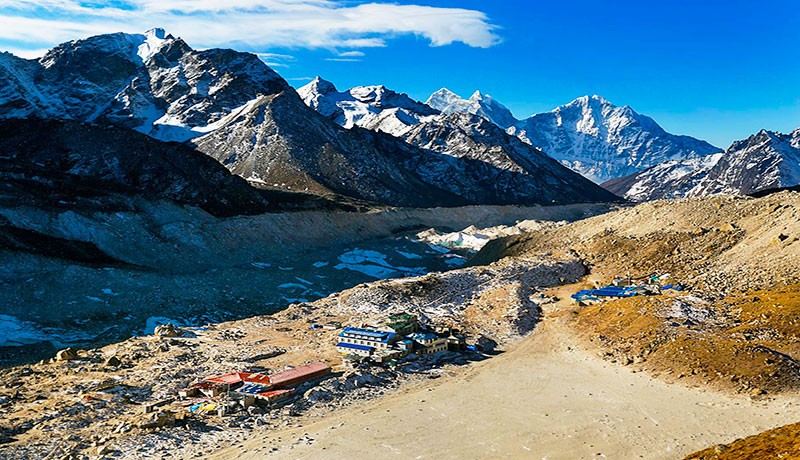 Gorakshep from trail to Kalapatthar

The Everest Base Camp (EBC) Trek 14N 15D is one of the greatest opportunities to conquer the highest base camp (5364m) in the world and even higher- the breathtaking vantage point at Kalapatthar (5,545m), which overlooks the area with terrific views of the highest mountains in the world including Everest, Lhotse, Nuptse, Makalu, etc. Trekkers also get to interact with the indigenous people while hiking along the trails. This is one of those highly ‘commented about’ trekking routes to the Everest region. It was in 1953 when two legendary figures Sir Edmund Hillary and Tenzing Sherpa had taken the same route while trekking to the Mt. Everest or "Sagarmatha" in Nepalese language.

After a half an hour scenic flight to Lukla, we follow an impressive route through the heart of fine Sherpa villages, with each village having something new to offer. It offers an ample chance to explore the beautiful forests, cultivated countrysides and several monasteries situated at high elevations on the way. We climb on to Namche, the main trading village of the Khumbu area continuing via Thyangboche/Tengboche monastery to Pheriche and Lobuche. A trekking hub between EBC and Kalapatthar and Lobuche is Gorak Shep at 5710m, from where we follow the trail towards EBC (5364m) at first and get back for a night halt and continue towards Kalapatthar (5545m) the next day. This is the highest point we will reach in the entire trek and is the point of our return. Our return trail will be via Gorak Shep to Lobuche and Pheriche, descending all the way down to Lukla via Namchebazar. And head back to Kathmandu via a flight from Lukla. For EBC Trek details, click the "Day to Day Detail Itinerary" button below.

This trek to Everest Base Camp EBC has several attractions, chief of which we get to see breathtaking scenery, the unique culture of the Sherpa people of the Solukhumbu, the region where Mt. Everest and it's attendant lesser peaks are located in a bluntly beautiful display, daring all to challenge its might.

This incredible journey to the Everest Base Camp is designed especially for those who have planned to trek a bit long and tough trail through remote settlements where the living standards & change according to the altitude levels. This trek is suitable for experienced trekkers. The primary goal of this trek is to perceive the Everest at 8848m and visit the Sherpa villages for some upfront interactions. This Everest trek brings you some of the greatest views of four 8000m peaks (Mt. Everest 8848m, Cho Oyu 8153m, Lhotse 8516m and Makalu 8463m). Viewing these massive peaks upfront as one can get without summiting is what this wonderful venture is all about.

This Everest and Kalapatthar trek expedition is based on a combination of flight and trek. The trip can always be customized according to the requirements with addition or deduction of the trip days and also altering the mode of transportation as per your travel duration.

Summary of the Season and Weather in Everest Base Camp

Spring:  March, April, May: Calm and Clear – the best time to trek EBC

Drop Someone a Line